It is hard to imagine that back in the 1970s in Ireland there was a hugely successful, pioneering jewellery company if you think of the disastrous economic situation in Ireland at that time. With thousands unemployed and many more having emigrated. It would not seem like the best time to open a jewellery business on paper. But that is just what Swedish born, Marika Murnaghan did. And she did it well, at the height of the business she had between 30 to 40 people working in her workshop based on Capel Street and later Bow Lane East under her business’ name Marika Jewellery. Producing the jewellery pieces needed to keep up the insatiable demand for her work. During its heyday she had shops in London, Cork, Dun Laoghaire, Capel Street, Dublin Airport, and the famous shop in Grafton Street. Marika has left a legacy behind her of enormous proportions. Although, somewhat unheard of today, she was a remarkable silver/goldsmith, designer, and businesswoman. A true renaissance woman. With appearances on Gay Byrne’s the Late Late Show and often the subject of generous newspaper articles and the ‘who’s who about town’. She was a well-loved part of the Irish design world and made a large stamp on the county she called home.

Born in Sweden in the large inland city of Örebro as Ebba Marika Wallenstrom in 1940. She then went on to study jewellery design and silversmithing in the Craft and Design course at Konstfack, the art college in Stockholm from 1963 to 1965. There is no doubt that being in Stockholm, such a modern, design focused city during such a pivotal time in her life shaped her design and helped to inspire her. 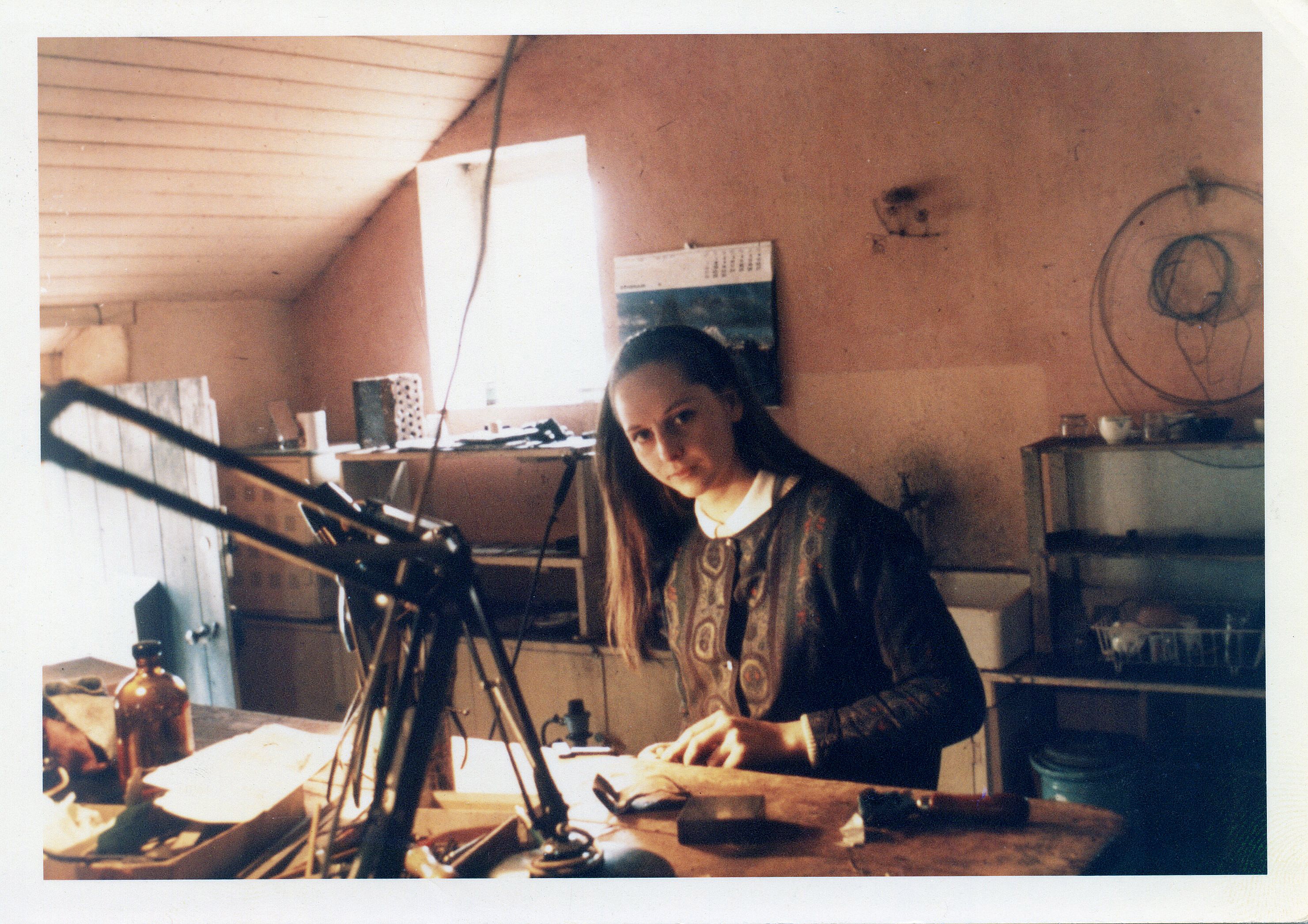 It was there that she learnt her trade of silver and goldsmith. A great example of her early work from this period is a silver Teapot with her signature flower motif on the lid. This teapot is currently on view in the National Museum of Decorative Arts and History.

Marika’s first visit to Ireland was with school friends. It was on this holiday in Co. Cork that she would meet her future husband, Denis. They stayed in touch with each other, visiting one another over the many years that followed their initial meeting. They were married in 1965 in Marika’s home city of Örebro, moving to Ireland nearly immediately after.

It was the initial struggle that Marika had when she first moved to Ireland that most likely reinvigorated her desire to create. She joined a jewellery studio in Sallynoggin called Seabhac, started by Elizabeth O’Driscoll. It was also here that she worked alongside Irish jewellery designer Una de Blacam (nee Craddock) for a time. Seabhac proved to be a great diving board for Marika’s career as in 1968 she won The National Craft Jewellery Award at the RDS. Giving her the ability to start her first solo workshop on South King Street. The business had soon outgrown this premises and was moved to Capel Street, giving Marika jewellery the space to flourish. In the mid-70s there were three goldsmiths, one setter and a polisher employed as well as casters. There were not a huge amount of jewellery manufactures producing cast pieces in Ireland at the time, Marika was certainly one of the first in the country if not the only company to cast and design her jewellery in-house. Marika’s keen eye for simplistic design captured the imagination of many and the method of casting enabled her to produce her pieces at a faster rate than by hand. It allowed Marika to expand her business at the rate that she did.

When I spoke with a former employee, Barry Grogan, who worked in the Capel Street workshop as a caster, he said that they couldn’t keep up with the demand. Women used to queue to get into the shop to get their very own Marika Jewellery pieces, which were highly sought after. He remembers having to go up to the shop twice a day to replenish the stock. Such a thing might not even happen nowadays. Her pieces were coveted by all, and the affordable price point meant that woman could buy things for themselves, without waiting for Christmas or birthdays. Marika was instrumental in that way of bringing timeless pieces to the masses. The pieces were remembered ‘gleaming in the window’, giving the everyday Irish woman the purchasing power, igniting a special memory for all who experienced it. 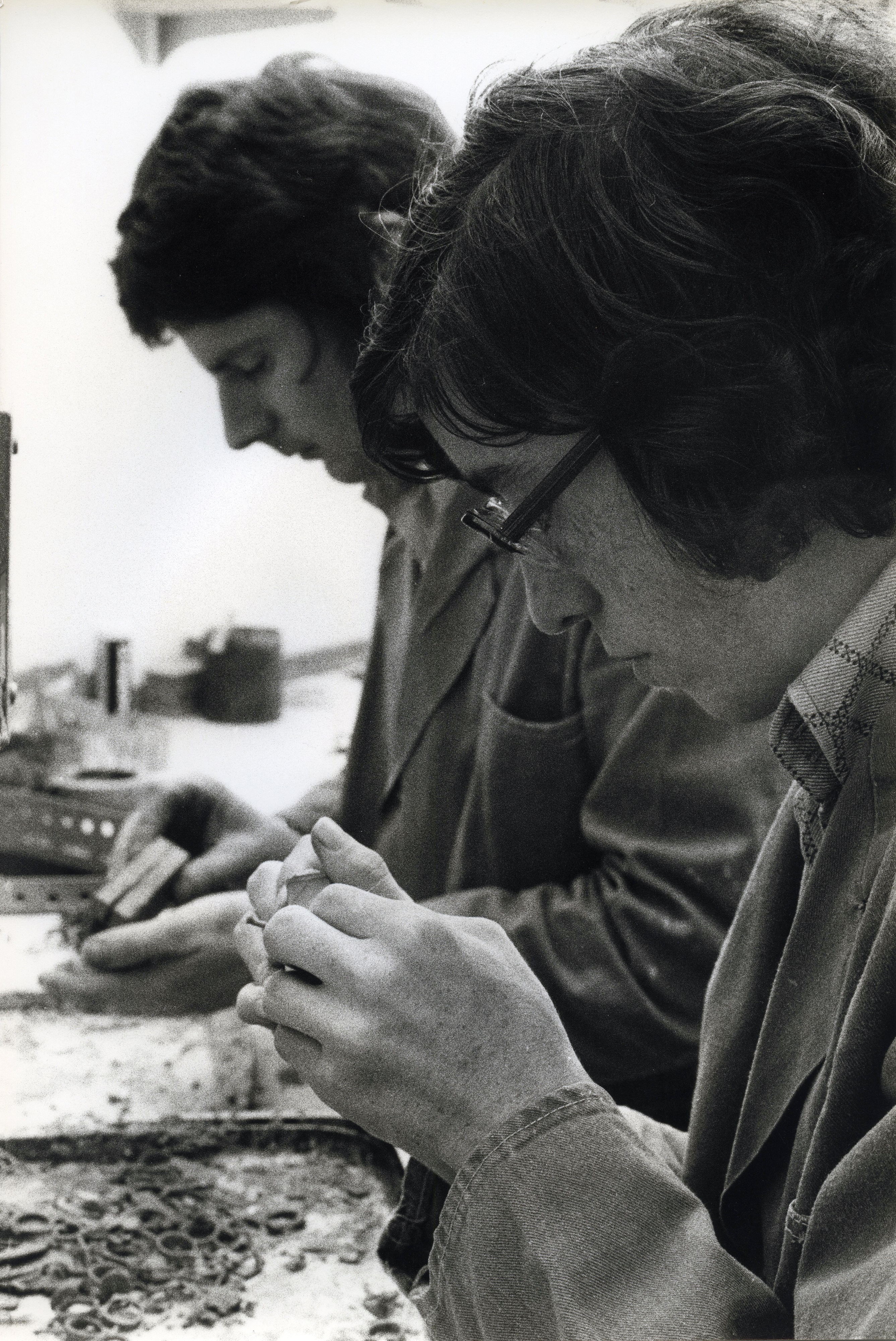 She had great respect for all her employees at the workshop, as she herself was a skilled silversmith she had great admiration for others who shared the love for the process of making jewellery, Barry remembers. Giving space for the guys in the workshop to create, Marika had a great love for the entire process that went into her work. From the initial design inspiration to first making the piece in metal, casting from this machete to later go through the hands of the stone setters and polishers and then finally into the shops. It was not Barry’s plan to go into the trade, his brother worked as a goldsmith for Marika, when his brother broke his arm, Barry was told to go around to the workshop on Capel Street on a Friday to collect his brothers’ wages.

From this point onwards Barry was hooked! He worked as a caster for Marika for several years. After finding himself working out of the trade several years later, it was Marika that put in a good word with a jewellery manufactures in Rathmines who were looking for a caster. She tracked Barry down and set him up with the job. Marika got him into the trade and helped him get back into the trade once again. Marika went over and beyond for her employees, and it shows through her work, every piece was expertly made, with complete attention to detail, she was a remarkable woman. 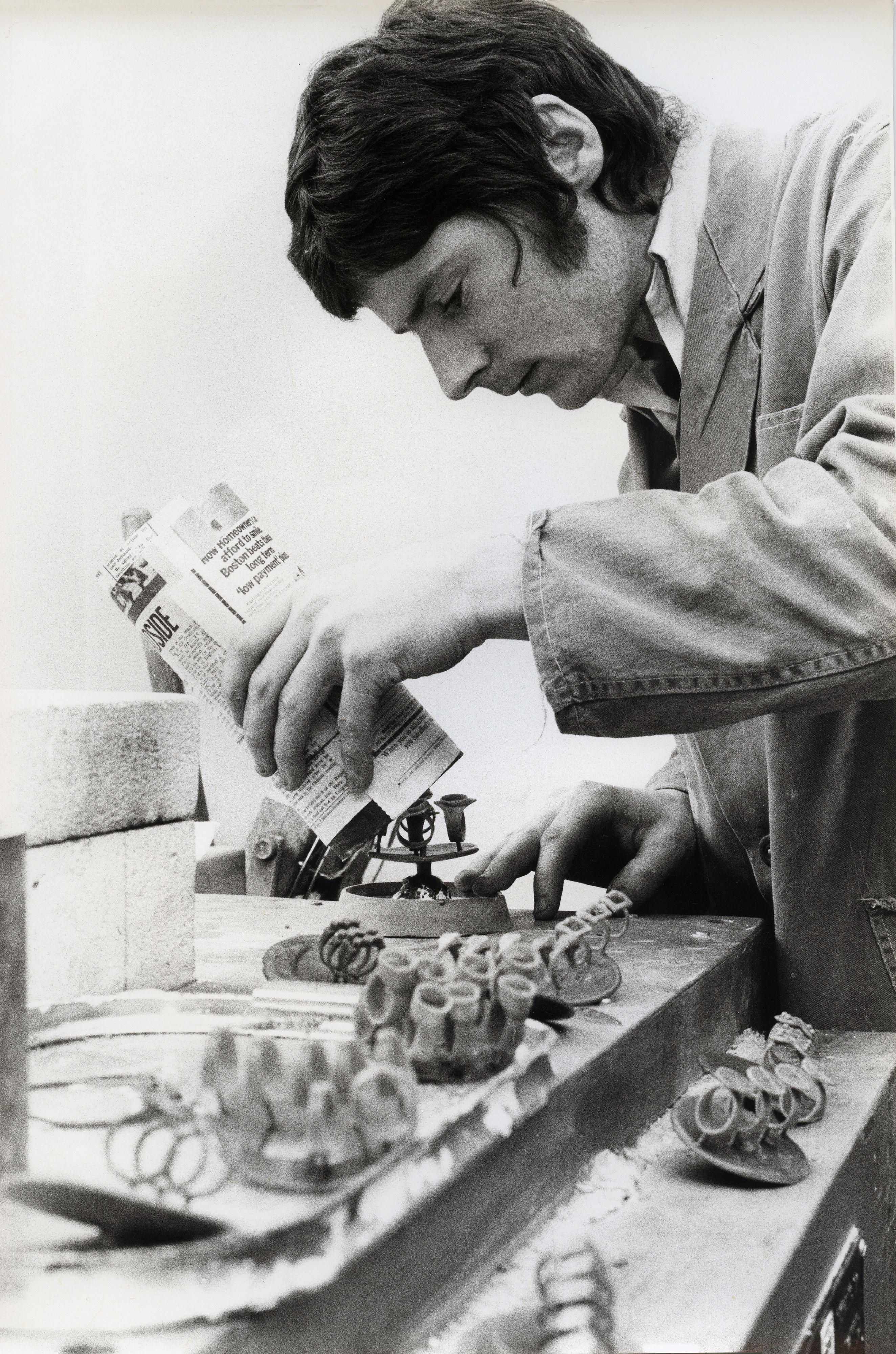 In the height of her business, Marika Jewellery was found in Dun Laoghaire, Grafton Street, Dublin Airport and in London where Marika used her Scandinavian heritage as her selling point.  She moved the workshop to Bow Lane east after several break-ins at their Capel Street premises.  She employed between 30 – 40 people ranging from setters and casters to polishers to the staff working in all the various boutique locations. It was quite a remarkable business one thinks of all the auxiliary people who depended on Marika Jewellery Ltd. For their livelihoods.

Marika had an immense love for animals, especially horses. The Dublin Horse Show at the RDS was described as her Christmas! Her love for horses was unwavering all the way through her life. It continued even when she became too ill, after being diagnosed with Hodgkin’s lymphoma. In a 1988 interview with the Sunday Tribune, Marika tells Deirdre Purcell the last time she rode a horse, saying that “[she knew] instinctively that this was the last time she was going to ride.” Marika’s love for animals extended to dogs, and a particular poodle named Coco. The pair were inseparable, only for when Marika became too ill to care for Coco. She was then sent to stay with Clodagh Madden, who worked for Marika’s husband at the time. In an effort to cheer Marika, Clodagh started writing letters to her as though they were from Coco, complaining about the lack of treats or affection she was experiencing! After Marika passed away the letters were compiled and published as a book, ‘Dear Marika: Letters from Coco’, copies can still be purchased today.

In her final year, Marika had an exhibition of her life’s work together with Beth Martens, who was an American born sculptor. The exhibition took place in the Hendrick’s Gallery, St. Stephens Green. Shanahan’s on the Green now stands in its place. Many famous Irish figures were in attendance at the exhibitions opening night. Eugene O’Neill of Ryanair made a special presentation of Marika’s work, a silver seal, to the former Taoiseach Charles J. Haughey at the reception. Blaithan de Sachy, the Gallery’s Director, presented Dermot Desmond with a candelabra made by Marika, it was purchased by Mr. Desmond for the opening of the then new, Custom House Financial Services Centre. Mr Desmond said at the opening, “The purchase of this beautiful piece has been made…because it reflects the skills, vision and courage of the artist.” Marika even appeared on Gay Byrne’s The Late Late Show speaking about her immense love of design and her art.  The exhibition was a roaring success and was a lovely tribute to Marika showcasing her timeless designs. 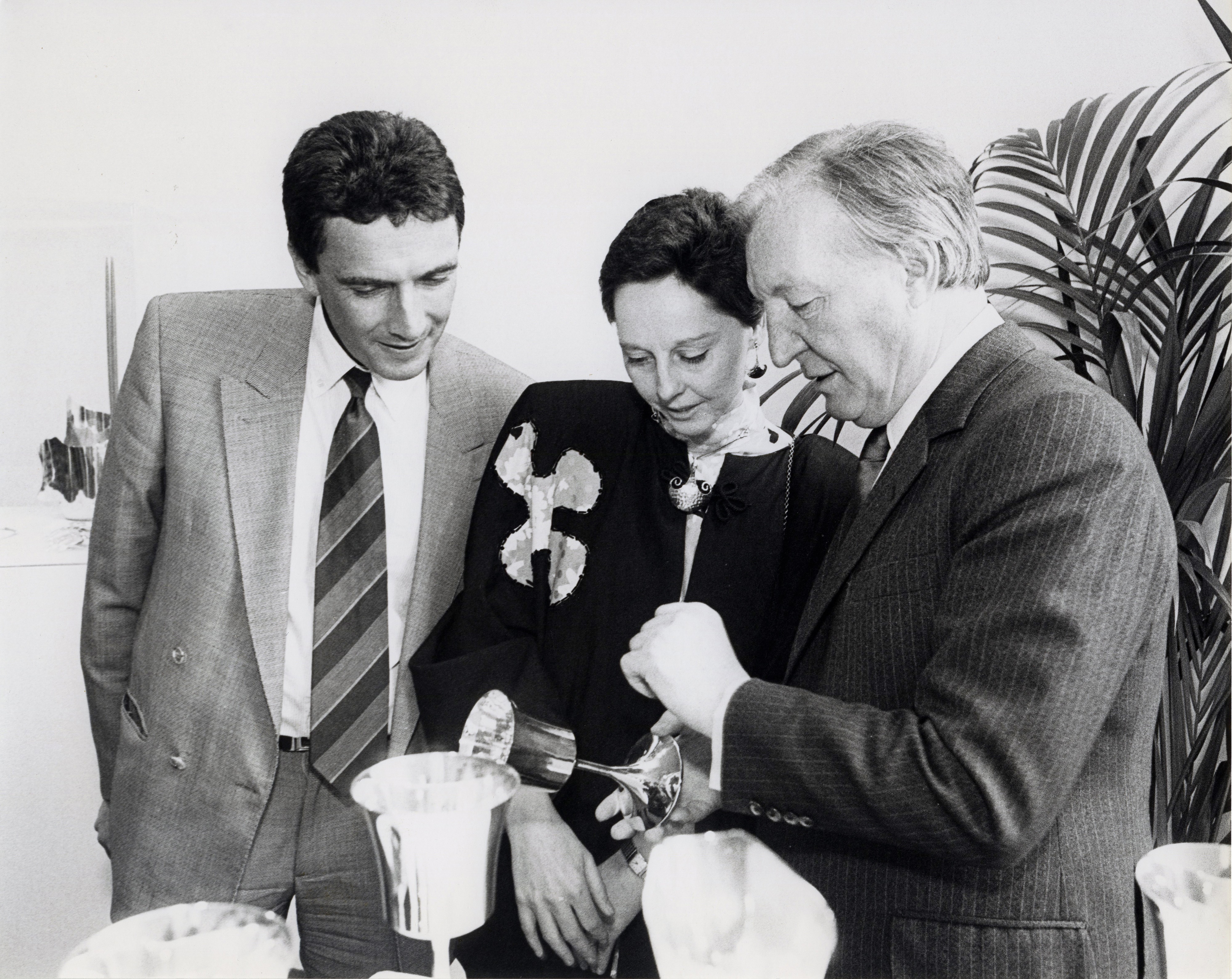 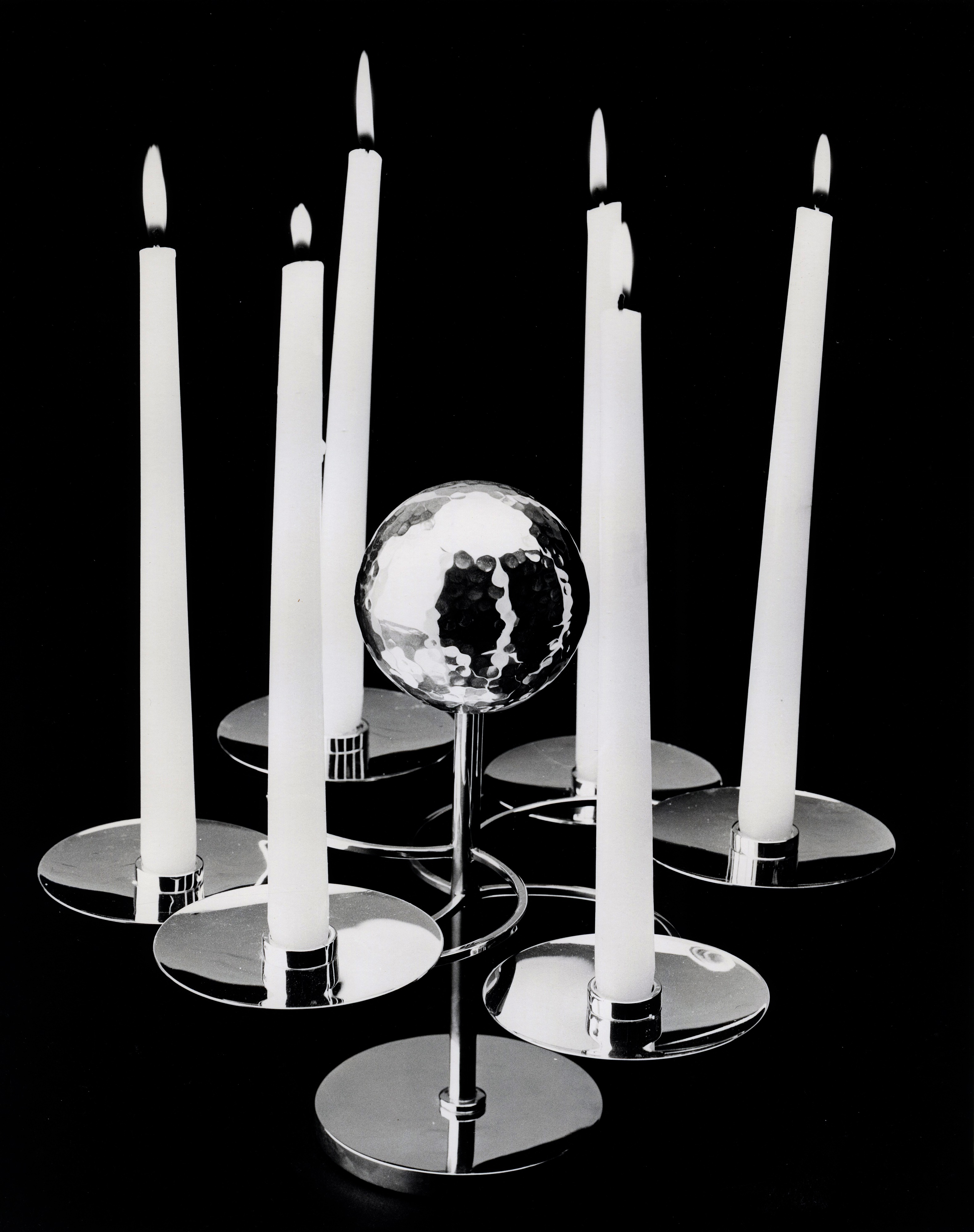 The Hallmarking Act 1981 brought into effect a standard and hallmark for platinum in Ireland for the first time. To mark the occasion the Dublin Assay Office organised a public ceremony for the hallmarking of the first piece. Assay Office announced a design competition for the first piece of Irish hallmarked platinum. In Marika’s submission to the Assay Office she wrote, “[the comb] is supposed to be an object d’art in itself, just to please the eye, and I have played around with ideas from nature, incorporating them with my original source of inspiration. This includes some chase and repousse work.” Marika won the competition becoming the first person to have a piece hallmarked in platinum in the country. This is her legacy, a clear triumph of her design and her exceptional standard of her work. The platinum Comb can be found on private display in The Assay Office.

I was lucky enough to view the comb together with two of Marika’s nieces, Julie and Vanessa Murnaghan as well as former Assay master, Ronald le Bas. We were kindly allowed to take a photo with the comb, as pictured.

Some of Marika’s work is currently on view in the Museum of Decorative Arts & History, in Collins Barracks. It would be lovely to see a retrospective exhibition of Marika’s work as she was a true artist and visionary. Her timeless designs live on, still just as beautiful and wearable as they were when they left her workshop originally.

Here at O’Reilly’s Auction Rooms, we have a large collection of Marika Murnaghan’s work in The Design Sale. Ranging from a beautiful silver bowl with a sleek and very modern design to exquisite silver collars made to be worn with a t shirt and just as fittingly with an evening gown. We even have two lots of workshop collections, comprising of various loose stones and jewellery fittings that would have been used in her workshop, something like this will never come to the market again.